A brief history of the Nailsworth and District Skittles League....

The League was initialy formed with eight teams, consisting of all men at that time.

Four teams played at the Britannia, two from Horsley (Bell & Castle and the Yew Tree) and Newman Henders.

All seven of these were previously playing in the Stroud League but due to there being only two taxis in Nailsworth and very few people having cars, it was decided to form their own league.

On Wednesday, August 18th 1954, Harry Shelton called a meeting at the Britannia, Nailsworth with a view to forming the Nailsworth Skittles League.

A Committee of five were M. Ind and M. Davies from Horsley, Rocky Rhodes, Lindsay Aldridge and Charlie Deacon.

Of the five alleys that were used when the Nailsworth Skittle League began, only the Fox is still used for Winter league skittles. The Yew Tree closed around 1970 and at the Britannia, the bar now stands on the alley following extensixe refurbishment.

In subsequent years, 1968 saw the first teams at Forest Green Rovers Clubhouse and in 1980 the construction of Shortwood Utd's Clubhouse.

Nailsworth Comrades Club alley moved from the function room to it's present basement position while more recently, Nailsworth Social Club created a new alley to replace the temporary one.

Of the 23 teams currently in the league, four play at Avening, seven teams play at Shortwood, three play in Stroud, two play in Minchinhampton, one in Hawkesbury Upton, two in Wotton-Under-Edge and four in Nailsworth itself.

Beside playing league games, all team members have enjoyed knockout cup games for the Mark Smith Cup and the Stan Short Trophy.

The final team trophy is the Front Pin Knockout Cup, thought by many to be the most prestigious cup to win.

The league also run end of season men's and ladies singles and pairs.

A Captain's Cup and a cup for stickers to encourage then to play skittles is also used. 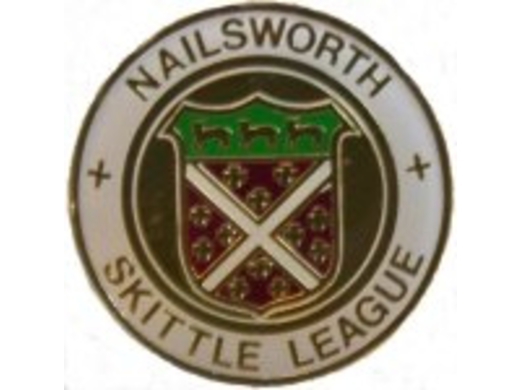